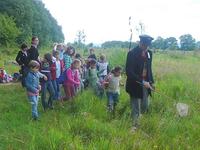 Varia gets a visit; from Inox Kapell, the insect man from Wespbaden. On December 16 he will give a short lecture about everything that concerns him. In addition, we serve some soup.

Inox Kapell loves insects. As a child he was already obsessed by these creatures and documented them. Today he takes people on insect excursions, for example in castle Freudenberg. He makes films, music and art from and about them, including his work with the Dadaist band 'Ordnungsamt et la politesse’. Besides that he is the founder of the 'Insektium', an insect-related museum / gallery / happeningraum in Berlin. According to him, insects are often wrongly condemned, but he can mediate between humans and insects as a sort of ambassador.

A few of his words: