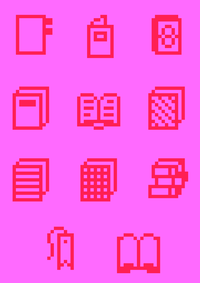 During the current times, Varia's Read & Repair days are relocating to digital collective spaces. However, we are currently trying to find the right balance between having moments of togetherness through collective reading and sharing, while not adding extra pressure or mental exhaustion.

For this next session we have planned some loose exercises and scores for reading and discussing together. They are without our aural voices and can be performed from a distance.

On Sunday the 26th of April, Varia is welcoming artist and educator amy pickles, who is working with cristina cochior and julie boschat thorez on a never ending (ever expending) project with Hybrid Publishing, a group of people from willem de kooning academy (wdka) Rotterdam, NL, to publish things hybrid-ly.

amy was asked to develop her graduation project (from master education in art, the piet zwart institute) that was called [sic] scripture, How to use scripts to imagine counterdiscourses? Here the script was a device to go ‘off script’ of dominant narratives.

Together, we are publishing some things - references, sounds, scripts - from amy's research. They are debris from workshops, they come from minoritarian positions and they have involved unusual exercises for the body.

What are we going to read?

We will be using a photocopied excerpt from "Deaf Republic” by Ilya Kaminsky, that amy uploaded into the library and indexed under debris.bought.references.ilya_kaminsky_deaf_republic_excerpt.pdf

Ilya Kaminsky (born April 18, 1977) is a hard-of-hearing, USSR-born, Ukrainian-Russian-Jewish-American poet, critic, translator and professor. He is best-known for his poetry collections Dancing in Odessa and Deaf Republic, which have earned him several awards. Extract source

In this book Ilya writes about deafness as a form of dissent against tyranny and violence. Deaf Republic opens in an occupied country in a time of political unrest. When soldiers breaking up a protest kill a deaf boy, Petya, the gunshot becomes the last thing the citizens hear — all have gone deaf, and their dissent becomes coordinated by sign language.

The story follows the private lives of townspeople encircled by public violence: a newly married couple, Alfonso and Sonya, expecting a child; the brash Momma Galya, instigating the insurgency from her puppet theater; and Galya’s girls; day and by night luring soldiers one by one to their deaths behind the curtain. At once a love story, an elegy, and an urgent plea, Deaf Republic confronts our time’s vicious atrocities and our collective silence in the face of them. Extract source

Our country woke up the next morning and refused to hear soldiers.
In the name of Petya, we refuse.
At six a.m., when soldiers compliment girls in the alley, the girls slide by, pointing to their ears. At eight, the bakery door is shut in soldier Ivanoff’s face, though he’s their best customer. At ten, Momma Galya chalks No One Hears You on the gates of the soldiers’ barracks.
By eleven a.m., arrests begin.
Our hearing doesn’t weaken, but something silent in us strengthens.
In the ears of the town, snow falls.

from Deafness, an Insurgency, Begins

We felt like Ilya's writing resonated with these times.

NOTE: This reading session will be held in English.